/me enters the auditorium

GOOD MORNING, Ladies and Gentlemen of the almighty creation! I welcome you to the subject "Stupidity - or how good is a good AI really?". I hope that you are wide awake even though it is 11:50 am because today's lesson is dedicated to a special form of the Artificial Intelligence: the UDAI - Unusual Dimwitted Artificial Intelligence.

To give you a hands-on experience of an UDAI, we'll use the highly rated video game Ghost Recon Advanced Fighter for PC. This game was particularly praised for the "intelligent" behavior of your own teammates. Was this praise justified or is the AI of this game part of the category UDAI? Let us look on some case studies. As an accord we use either the behavior of a normal American SpecOps with average intelligence or a Videogamer with a good level of common sense - both choices will lead you to the same conclusions. Let us begin with example A: 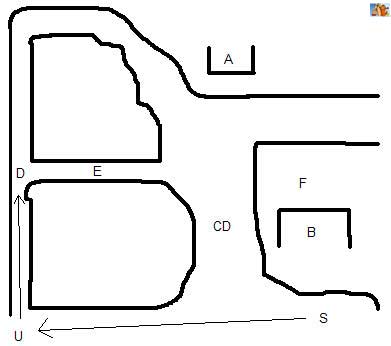 Example A: In GRAW you command a squad of three AI-comrades. At the moment you are on a mission and your objective is to neutralize the two bunkers A and B which cover the main road of the nearby city. Due to this objective, all squad members know, that the main road is 100% deadly illustrated here with CD which stands for Certain Death. Of course the game designers have implanted a by-pass marked with U in order for you to get to bunker A without dying. The commander, which is already at point U, now orders his squad which waits on point S to go from there to point D.

A human soldier would now conclude, that he has to go through point U in order to reach point D because the alternative would be to go through point CD where they would get shot. You could think, that the AI would come to the same conclusion and automatically choose to march to point U but that is not the case. The AI concludes, that the shortest way from point S to point D is through point E. Also this may be correct, the AI-decision leads us to:

Conclusion: All squad members get killed or at least heavily wounded -> Unable to finish the mission.
Unsatisfying workaround: Set strict way points for the squad.

Example B: The commander sees the mistake of the squad in time and orders his men with way points to point U before they get discovered and killed. Sadly the squad is already near point CD and one squad member sees the enemy at point F. Now the survival instincts of the squad kick in and the soldier engages the enemy which hadn't seen the squad yet. The rest of the team now also reacts to the threat and helps the attacking soldier. Meanwhile bunker A notices the fire fight and decides to join the action.

Conclusion: All squad members dead -> Unable to finish the mission.
Unsatisfying workaround: None. Once an enemy has been sighted, the squad ignores almost all orders.

Interim Conclusion: Both situation wouldn't have led to a premature end of the mission if the AI really would've behaved intelligent instead of listening to it's internal programming routines.

Let's take a look at another scenario: 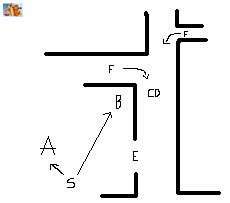 Example C: The squad has the objective to defend the remains of a building at point A and stands at point S. The commander orders a part of his squad to position themselves inside the house. One member has to go to point B in order to cover entry point E. There's a direct line of sight between point S and B and no obstacles whatsoever. Point B was explizitly chosen inside the wall (in which point E is) by the commander. But the teammate, which has been ordered to point B, seems to have a different opinion and goes through point E to point CD where he has absolutely no cover and the enemies from point F come raging in.

Conclusion: Teammate dead. Mission not endangered but still a very annoying outcome.
Unsatisfying workaround: The commander covers point E himself and orders the squad member to another position inside building A.

Interim Conclusion: The AI isn't even able to fulfill the simplest of all orders. Possible reasons for that are either a blackout or a AI-routine which tells the soldier: "There isn't enough cover here! Go and find a better place to hide in the near vicinity". This behavior is not acceptable in any case.

Now we come to the last example of today's lesson: 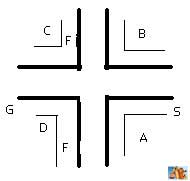 Example D: We are at a crossroad. Points A-D are buildings that obscure the sight. The commander stands at point G and his squad at point S. On point F are enemies that neither the commander nor his squad have seen yet. Now the commander orders his squad to go from point S to point G. Usually a easy task for the AI as there's no other or shorter way than just moving straight over the road. But of course the enemies on Point F see the squad and open fire. In example B we talked about what the AI would do under normal circumstances. Exactly: It tries to find cover and defend itself. No, that's not right in this case. The squad just moves on to point G and the soldier get themselves killed without doing anything. Also the squad radios in the position of the enemies over the InterCom, it doesn't react to it and instead decides to strictly follow the orders of the commander.

Conclusion: Squad dead and the commander killed himself out of desperation.
Unsatisfying workaround: The commander kills the enemies himself before giving the regroup-order.

In conclusion it is now clear, that the highly praised AI of GRAW often falls back into a UDAI-mode and so brings tears to the eyes of the commander. Of course there are several more negative examples but I think, fellow students, you got the idea. We'll talk about the EIAI (Exceptional Intelligent Artificial Intelligence), which can also be found in GRAW, in the next lesson.

This concludes today's lesson and I want to remind you again, that all this will be part of the exam!

/me packs his things